About three years ago I got to know MAMA, “a platform for visual culture and young talent – a gateway for young makers at the cutting edge of contemporary art and popular culture”. We collaborated on the project Character Building. This project exhibited the rich artistry of fans who devote their creative time to cosplay, fan art and fan fiction.

For many people, especially underrepresented and marginalised identities, fan fiction has been a refuge to rewrite, rethink and reclaim storylines for their beloved characters. So here I am in this confinement (2020) - from a context of comfort, granted - not really agreeing with this cluster fuck of a reality, transporting myself in alternative worlds.

Here’s an article I wrote in which I shared my reflections, after the project concluded.

Fan Culture: an Archive of Our Own

A cultural archive is a collection of values, identities and history that shape a societal identity. But how are these archives and societal identities built? Who decides what is part of this archive and what not? One of the most known and important aspects of this cultural collecting process is the Western arts canon: a ‘shared’ referential framework of stories, images and artworks composed by European and Northern-American, (mostly) white men.

Our Western canon has been (re)composed and critised throughout history; but it still remains a predominantly imperialistic, elitist male perspective. Not only does this perspective exist in the content of the cultural archive, but it also reflects who gets to be the gatekeeper.

Since the twentieth century more women and more racial minorities have been included in this canon. Although, this does not mean they become a fundamental part of our school curriculum. Finally, these canonical universal truths, in literature and philosophy, create cultural biases which form the lens through which we understand our environment.

Many mainstream media often maintain the same types of narrative matrixes which re-establish that exact predominant perspective. This bland rechewing results in the usage of predictable plot and character developments, the so called tropes. To name some that are very commonly used, and in my opinion uphold harmful cultural stereotypes: white saviour complex, damsel in distress, victim blaming, token minority deaths…

These tropes are interconnected: once they are part of a story, it (sub)consciously activates related areas in our personal cultural archive. In short, stories like most Hollywood films, re-use the same narrative grid over and over again. In doing so they re-install stereotypes and cultural biases. It is kind of like monocropping; at some point the soil needs a change of input otherwise it risks becoming bland and infertile.

Still, even mainstream media productions are consumed (and celebrated) by fans who might feel inadequately represented by the narrative tropes that are often incorporated. These fans or groups of fans consist of various fandoms. What characterizes a fandom is the shared love for a specific film, game, comic, etc. But within such a group multiple disciplines imitate, recreate and adapt parts of their beloved cultural product in order to propose an alternative narrative. This can for example be through acts of cosplay or the creation of fan art and fan fic. In doing so, these fans set up an intertextual relationship with its canon, and by extent the cultural archive, they are part of. A lot of fan culture connects and reacts to popular mainstream media. By reimagining mainstream narratives and tropes through plot changes, representation and narration strategies, these (re-)creators attribute to their own archive, which surpasses the Western canon. 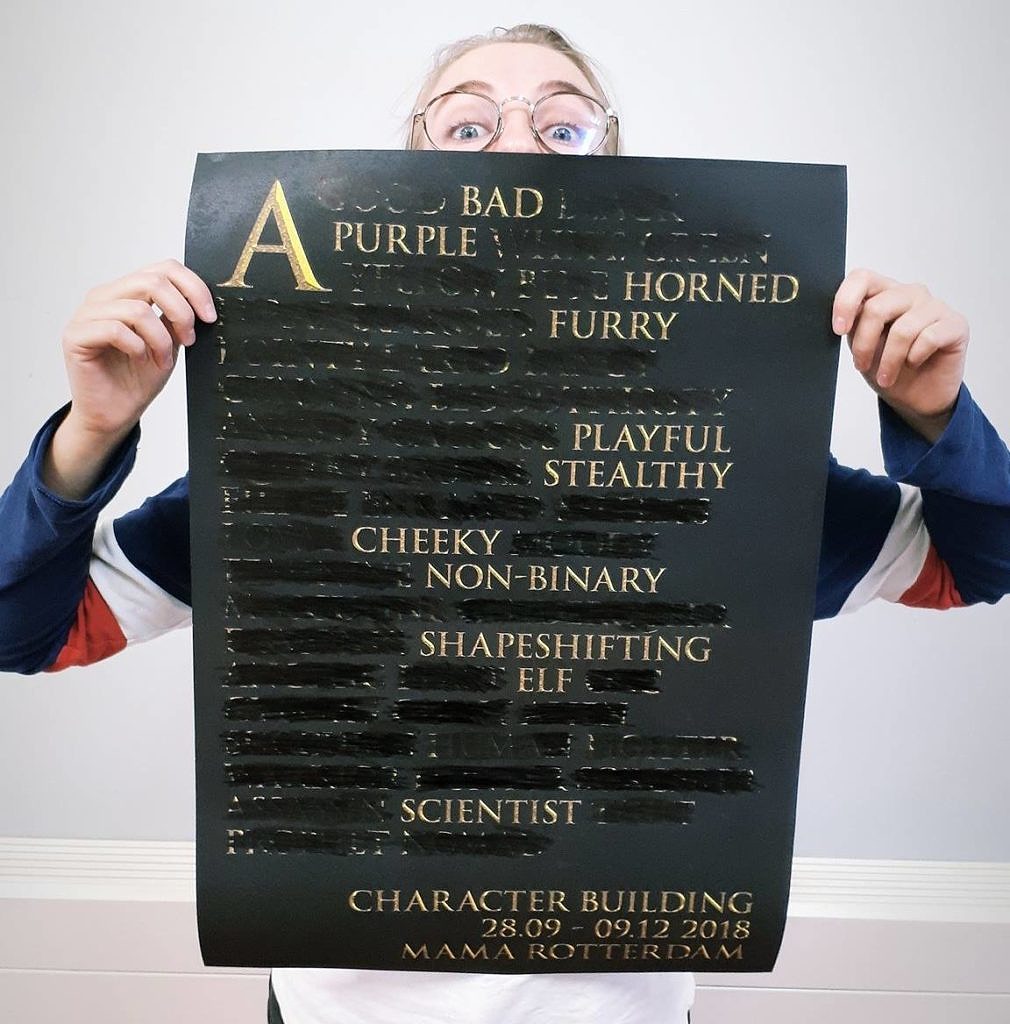 Laura Deschepper proposes a character as part of the promotional campaign for Character Building. Design for this campaign was done by HOAX.

In the exhibition Character Building, which took place from September – December 2018 at MAMA, we deliberately focussed on the emancipatory and subversive methods that exist within the fan culture practices of cosplay, fan art and fan fic. We worked together with four cosplayers, Elfmist, Iska Cosplay, Silas the Virus and Lucid Belle, to co-create the first and second phase of this project. As part of the project we also asked them to choose a character to develop in and around MAMA’s showroom.

Just as cosplay plays with shaping identity and the possibility to respond to popular narratives in an individual and unique way, fan fiction stories allow for the same reimagining from a literary perspective. Read the publication here; it is the perfect addition to the world that Character Building explored.

During Character Building there were some key moments, that made me reflect upon the empowering effects of cosplay, but also the way it sometimes clashes with traditional dominant ideologies that manifest themselves in the public space.

Below I will discuss one particular narrative aspect of each of these four cosplayers, and consider the strategies they employed; and how these strategies affected both me personally and the narrative structures they challenged. The anecdotes are supplemented by beautiful photographs of the cosplayers, which Studio byMarije took as part of the project.

Firstly, I would like to introduce you to Elfmist, who mostly crossplays (dressing up as a character of a different gender) anime characters. He is a tall Dutch lad, who identifies as male and loves to imitate female characters. During Character Building Elfmist transformed himself into La Pucelle, a character from Magical Girl Raising Project. At one point, when we were crossing the street towards our photo shoot location, a man objectified Elfmist by shouting remarks about his body (in La Pucelle outfit) and asking his number. Afterwards Elfmist said he could relate to how women feel walking in public and getting catcalled. In this instance, crossplaying is not only a disruptive method, it also provides the possibility to explore other gender experiences, to a certain level. 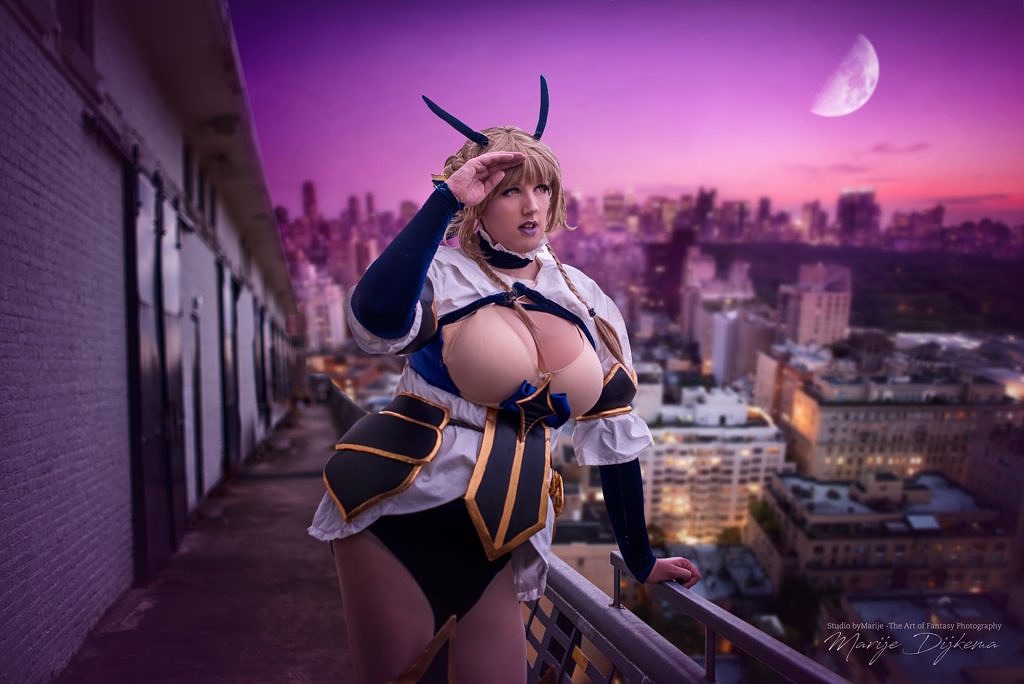 Iska Cosplay chose Medivh, a male mage from World of Warcraft, as her character. Apart from reactions and perceptions from adults, it struck me how different kids reacted towards Iska. For her photoshoot we went to Kralingse Bos and passed a group of little kids. Most of them looked at Medivh with big eyes full of curiosity; but some eyes were filled with utter fear. It was a wonderful way of starting the photoshoot session – being validated by a group of kids. And each of their reactions, be it terror or curiosity, elevated the Medivh character to something more than a cosplay. For me, the photoshoot, the cosplay and the setting still resonates all this time later. It was a really magical sight, this grey bearded mage in a dark forest full of wet leaves and diffused light. One can only wonder what the world must have looked like for these little kids that time they encountered Medivh in the Kralingse Bos. 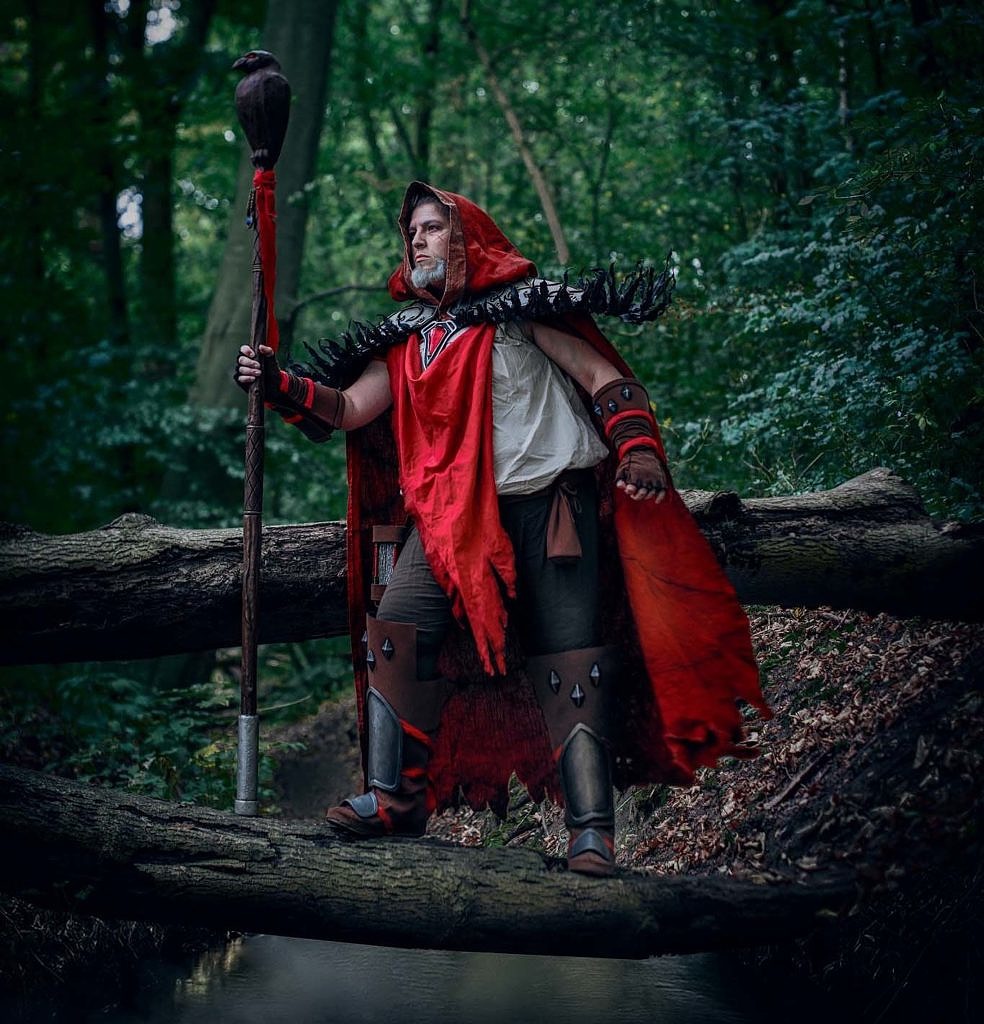 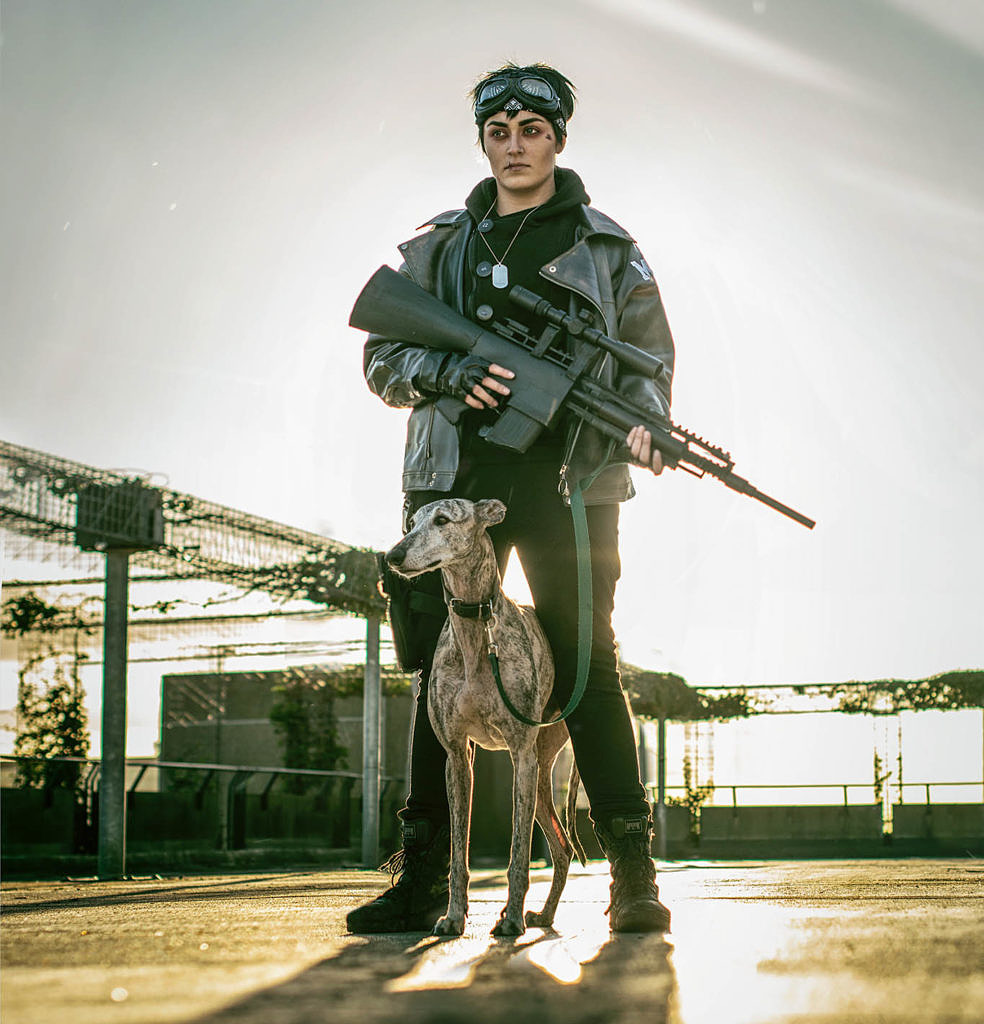 Silas the Virus as 10k for Character Building © Studio byMarije

Next to gender adaptations through crossplaying or through adapting the gender of the original character, cosplayers can also change the original storyline and character traits. Silas the Virus blended her reality with that of her character 10k, a young, introvert zombie killing man in Z nation. She took her dog with her to the photoshoot – in these circumstances she appropriated the fierceness of 10k and his emo steampunk aesthetics, while adding an a non canonical adaptation by inscribing her own relation with Flaco (the dog) into this image. Silas took a part of her personal life that is very important to her and completely ingrained it in her version of 10k, thereby reimagining the character and its background. Oh, and as a side note: Silas made the entire gun from scratch. I still remember her hard at work in MAMA’s showroom, mapping out the blueprint for the gun in detail; and it was well worth it, since the gun came out awesome!

Finally, one very empowering cosplay in Character Building was Lucid Belle’s take on Devil Kazumi from the beat’em up game Tekken 7. Devil Kazumi is a very interesting character on many levels. She is the alter ego of Kazumi Mishima, come into existence after being consumed by the effects of a Devil Gene. This Devil Gene was supposed to help her accomplish her destiny of killing her power hungry husband Heihachi, who functioned as a main protagonist in the video game series. In the canonical version of the game Heihachi kills Kazumi during a fight, thus ending her storyline. Lucid Belle did not agree with this ending, so she changed it in her cosplay creation. In Lucid Belle’s reimagined version of the Tekken-lore, Kazumi is the one who destroys Heihachi. Reversing the canonical ending gives a powerful boost to Kazumi’s character: she’s dead set on achieving her goals and is not to be messed with. Heihachi dies and Kazumi gets to live on and become a more important actor in the story. 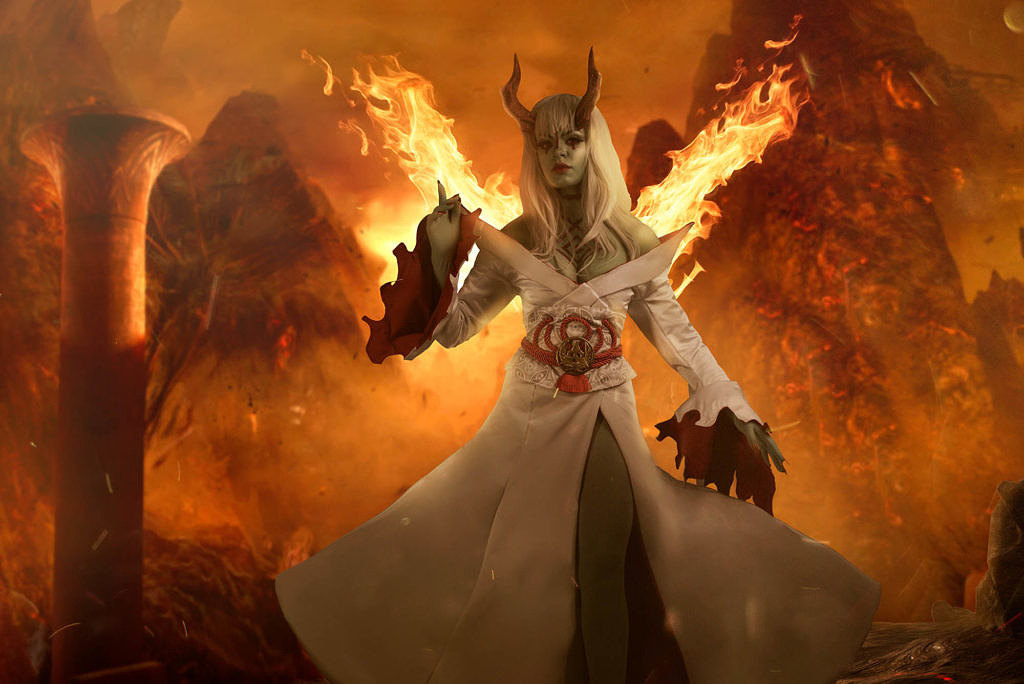 This story is written by Laura Deschepper and inspired by MAMA’s exhibition Character Building, which took place at our showroom from September 28 – December 9 2018. Photos in the article were made by Studio byMarije.